This is the place for chit chat! Everything goes even Star Trek! Just make sure to buy the Moderator a drink!

What is the T65-XJ3 Xwing? Perhaps the youngest do not know that, before Disney bought the Lucasfilm and the new trilogy was produced, many novels were written set several years after the events of the "Return of the Jedi". Today these stories are called "Legends" because they are no longer part of the official canon. In the new movies, the X-Wing that fought for the rebellion was replaced by the T-70 model, but in the "Legends" novels it was the T65-XJ3 that took the place of the classic X-Wing.

There are no official images of the T65-XJ3, only brief descriptions. We know that it did not differ much from the old model, only for some important characteristics: the new X-Wing was equipped with two ion engines, instead of four engines. It was also equipped with a third torpedo launcher mounted under the nose of the fuselage. It was equipped with four advanced lasers, which produced a blue ray, and the most advanced models were "stealth", that is invisible to the sensors.

There are many artistic interpretations of the T65-XJ3 made by fans. Most of these show a classic X-Wing, slightly modified. Thinking of my interpretation of the XJ3, I wanted to push, proposing a fighter that resumed the general architecture of the classic X-Wing, but with a more aerodynamic dress and more multi-faceted lines.

The result is a "stealth" fighter, equipped with four vents that convey into two small ion engines, similar to those mounted on the imperial TIE fighters. The nose is completely redesigned to integrate the third torpedo weapon.

Since this is my interpretation, I do not argue that this should be the T65-XJ3 starfighter, imagined by the readers of the "Legends" novels. I was inspired by the characteristics described above, to draw a new craft; the experiment of combining the characteristics of an X-Wing with the most modern imperial technologies.

My "XJ3 X-Wing“ (note that I deleted the "T65" from the name) is a fighter that has no direct reference to the novels that are in the official canon or in the "Legends". I imagined that something like this could have been a project for the Empire, in response to the success of the rebellion in the use of the X-Wing. An abandoned project, in favor of the development of the TIE Advanced and TIE Defender. 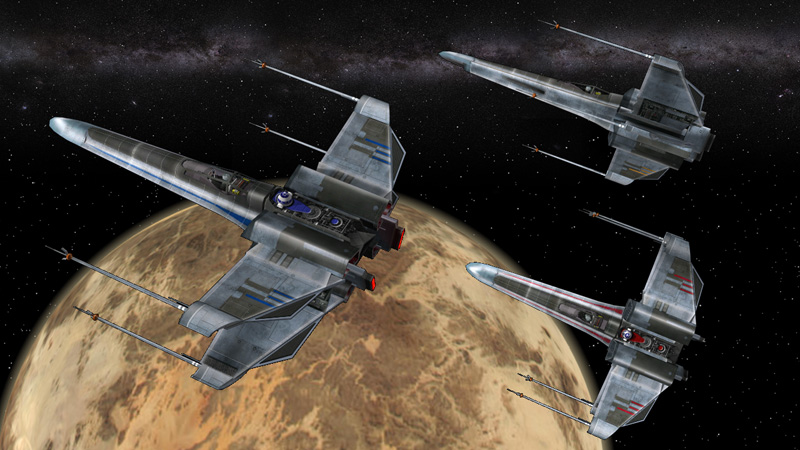 do like!
Rookie One, is that you?? - Ru Merleen, Rebel Spy at Imdaar Alpha
Current Holder of the Frying Pan of Death

I'm loving the shape of this X-Wing, it looks just great, I'm very impressed with this, loving the textures, it's looking very chrome/stainless steel like.

Glad you went with the newer pilot model for this one

Fucking hell DTM, that is glorious. Well worth the wait, great job!

On an off-topic note, I'd love to combine the XJ3 with the MC85 in some missions. Any news on that one?

That looks great! I like the chines - taking cues from the SR-71, are we? I suppose the third warhead launcher is non-functional, though. And the lasers probably aren't blue.

Hmm... This is a bit of an off the wall idea, but, Jeremy, might it be possible to modify the laser opt to have a second "flight group color" - the blue version - and write a hook to set the fg# for the laser based on the craft that fired it?

You can now include a blue version in the lasers OPTs and reference the color in a txt file based on the craft.
WIP: XwaOptEditor - opt texture limits - Custom hangars features

Thanks Jeremy! That's wonderful for all clone wars ships!!!
The third torpedo launcher is functional as secondary missile launcher...

Thanks for the great OPT!

The missile launcher is however bugged on my installation - looks like the OPT has three launchers in total, yet it seems launchers must always be dual. I get weird results, firing one of them also empties the other warhead type, with warhead counts incorrectly decreasing. Went back in order by suppressing the third launcher (or, I'd suppose, by adding a fourth launcher there).

Spettacolare!
Great Job!
I am just re-reading the Legacy of the Jedi Series
Post Reply
17 posts • Page 1 of 1