The one place to find the hottest news from the page.
Good things to know!
The heart of the page! Be sure to say hello!
What is done, or still needs to be done?
Here you can find lots of information about world of XWA-Modding.
This is were we show off our models
And here the fun starts!
Other cool sites!

This is the place for chit chat! Everything goes even Star Trek! Just make sure to buy the Moderator a drink!
Post Reply
31 posts

Probably the most dangerous starfighter ever produced: the TIE Silencer!

The TIE Defender is no longer the best fighter out there… 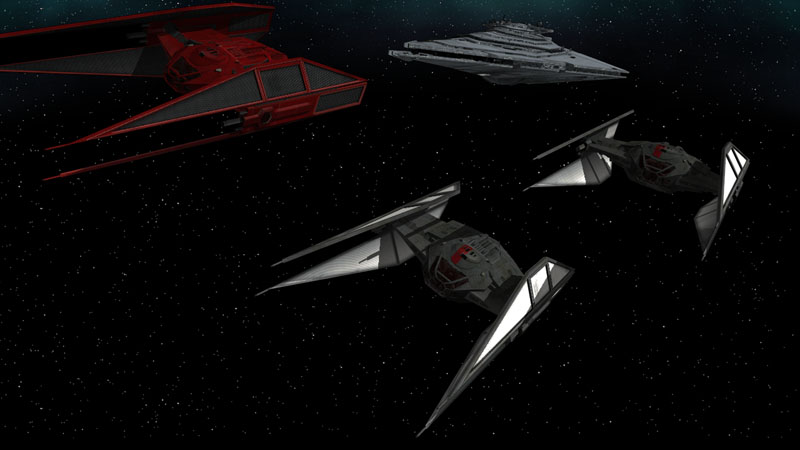 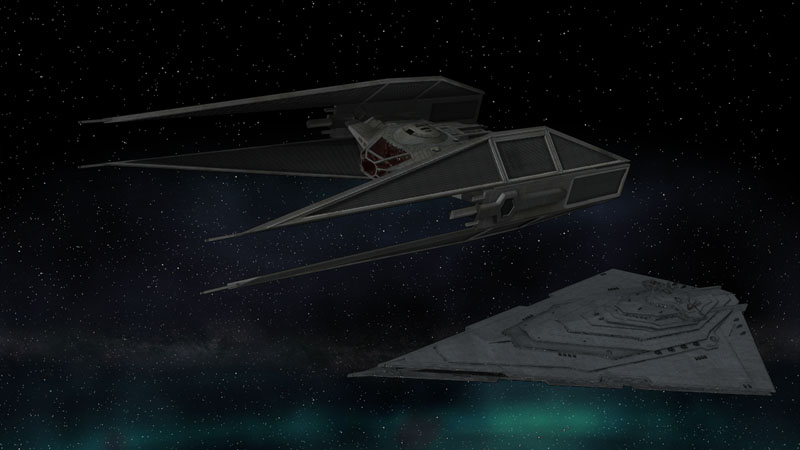 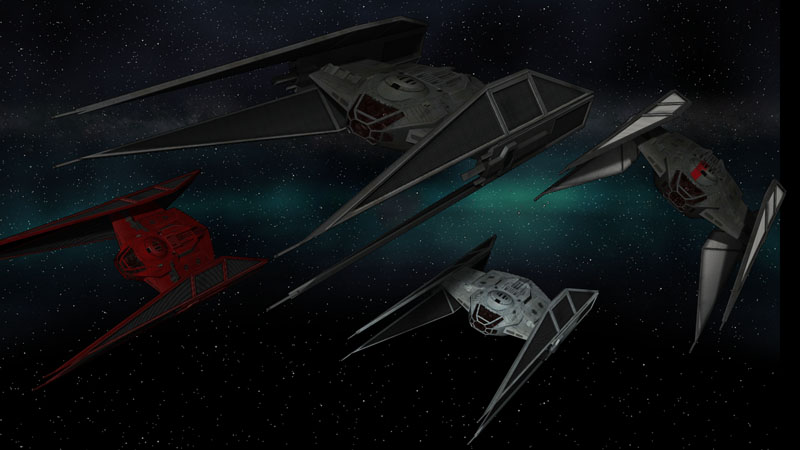 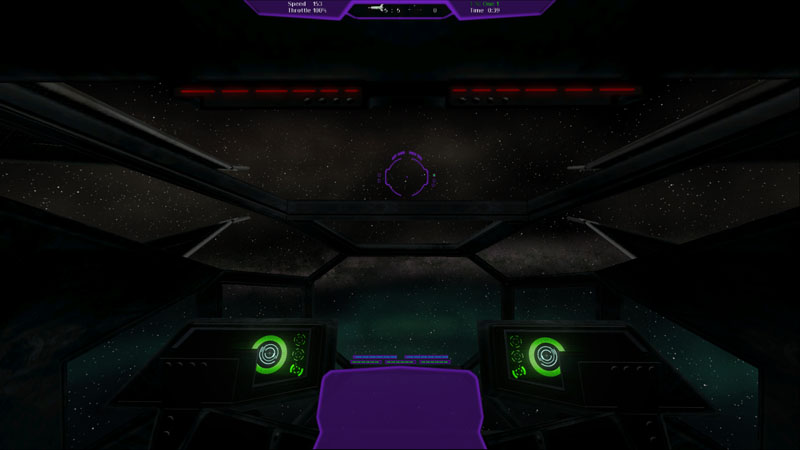 Special thanks to Driftwood, who exported the OBJ/DXF model, which was the basis for the realization of this OPT.
Have fun!

That is a beautiful ship, but that cockpit shot in particular made me say “whoa!” out loud.
“Red Four, nothing’s gone wrong yet.”
— Hobbie Klivian

My favorite TIE is now in the game, much appreciated.

Edit: You weren't kidding about it retiring the TIE Defender. Those stats, hot damn.

Impressive mate you have really done it justice

Did you set it up for dynamic cockpit?

But seriously, that is a wonderful model. Well done.

I‘m torn between what‘s greater ... that model or DS‘ and ual‘s reactions

Either way great work there!
Your ship, Captain. I need a drink. - Vince Trageton
Vince T's X-Wing HQ - where the bad guys get their gear

Great work, DTM! You are an OPT machine.
I don't judge tactics. The Battle is the best and only Judge.

The TIE Defender is no longer the best fighter out there…

The TIE Defender era is finally over!

No it is not. You cannot confront starfighter 30 years away each distant each others. A starfighter is designed for his own era, for the hunt of his times. Tie Defender demonstrated itself to be the best starfighter of the First Galactic Civil War. It set new standards, so the First Order basically build its strategy on the T/D experiences. And by the way with that two blind spots on the sides the Silencer is very impaired in fight against any good pilot. The visibility of the cockpit is awfull, and in dogfight these things have a lot of weight. T/D has no hindrance in any aspect, so I guess a good pilot could burn a medium pilot in a Silencer basically on a standard rate of success.
More over that thing is big! You can fire at it from kilometers!

That for ditto, the model is spectacular! GREAT JOB!

It may offer a bigger target, but if we go by its movie performance (which DTM based the stats on), hitting it is still going to be a problem because of its speed and maneuverability. Dogfighting a Silencer is going to prove an absolute nightmare.

I would agree though that the Silencer is the Defender of its era.

Let's not forget the TIE Silencer we saw in the movie was piloted by a strong Sith lord, force-sensitive elite pilot. Such a pilot would still be highly deadly in any other agile starfighter.
Last edited by Turgidson on Fri Oct 04, 2019 11:14 pm, edited 1 time in total.

All of that is highly speculative beside the force sensitive part.

For the skilled, expert pilot part, that's actually on the TIE Silencer's page on the official DB.

For the "Sith Lord" part, I'd agree it's speculative if not erroneous. Mostly because Snoke hasn't been confirmed as a Sith and probably wasn't one - the order probably became extinct after Darth Sidious and Vader. But on the other side, Snoke was the closest thing to a Sith Lord in that timeframe, Kylo Ren was his apprentice... and did defeat him (though not without additonal help). I'd consider Kylo Ren a de facto Sith Lord, but not de jure.


As for the Silencer: the model is great (as always!). However, weaponry stats don't seem to correspond to what I've found in references - AFAIK, it's supposed to have two laser cannons, two "heavy laser cannons", and twin warhead launchers. Not sure what firepower the different models of laser cannons are supposed to have, though...

For the "Sith Lord" part, I'd agree it's speculative if not erroneous. Mostly because Snoke hasn't been confirmed as a Sith and probably wasn't one - the order probably became extinct after Darth Sidious and Vader. But on the other side, Snoke was the closest thing to a Sith Lord in that timeframe, Kylo Ren was his apprentice... and did defeat him (though not without additonal help). I'd consider Kylo Ren a de facto Sith Lord, but not de jure.


Yeah, canon material has confirmed that Vader and Sideous were the last of the Sith.

Turgidson wrote: ↑
Sat Oct 05, 2019 12:20 am
As for the Silencer: the model is great (as always!). However, weaponry stats don't seem to correspond to what I've found in references - AFAIK, it's supposed to have two laser cannons, two "heavy laser cannons", and twin warhead launchers. Not sure what firepower the different models of laser cannons are supposed to have, though...

All of this indicates that if compared to the stats of the FFG X-Wing model it should be faster than an A-Wing.
I would say stats should have the silencer be:
Marginally more maneuverable than the A-Wing, I would say at maintenance mode it should probably cruise at 150mglt, 1/3 more hull than the X-Wing, same shield rating as the X-wing. Beam (Decoy) weapon, 2x missile banks plus (2x Torpedo) 2x laser 2x turbo lasers.

As much as I like the idea of ion cannons, the craft appears it was never intended to use them.

Otherwise I think the ship is pretty darn perfect.

Regarding having twin normal + twin turbo lasers: when fully linked, they'll fire at about double the firerate that quad lasers (or quad turbos) would have...

Looks like the XWA engine (and if I remember correctly, actually all of the XWing series games) reduces the firerate of starfighters that have more weapons of the same type. But if you link weapons of different types, the fire rate is the one of the primaries only... thus much faster.
There's no real engineering justification for this, from my perception. It's more about balancing... but fire linking of different weapon types simewhat breaks these mechanics, or at least makes them somewhat inconsistent.
Thoughts?

on weapons: official statistics are not consistent with the design of the starfighter. There are four standard firing mouths on the tip of the wings (like the TIE Interceptor) and two large guns in the center of the wings.

There are two explanations for this inconsistency:
1. whoever wrote the statistics cannot count ... but I don't think so.
2. (my thesis) the statistics refer to the prototype piloted by Kylo Ren in the movie. For some technical reason, Ren had to disable two of the four standard lasers.

The statistics I created for xwa are those of the serial version of the starfighter, derived from its design.
Regarding ion cannons: I followed the logic of the xwa game. Laser and Superlaser standards are the same weapons (they produce the same damage) and have only a different charging system. The Silencer's heavy cannons are very large. I felt that for the logic of the game it was better to convert them into ion cannons.

In the current game, standard, turbo and super lasers deal different damage. So the two heavy slots could be turbos (or supers) instead of ions. Though it'd still make this unit really overpowered.

Regarding removal of two lasers on Kylo Ren's fighter: I'd assume it'd also have an added benefit of higher speed, acceleration and manoeuvrability - due to more power available for engines and slightly less weight. I'd think the standard version would be slightly slower, with slightly less acceleration and turn rates.

Anyway, consistency has often been an issue in the SW universe... cf. the size of Executor, Home One. And some stuff can't really be made in-game, like the A-Wing's swivelling lasers (or, IIRC, Vader's TIE Advanced x1 having gimballed lasers).

The other thing I’d keep in mind is that the Silencers is a prototype. It wouldn’t be impossible for there to be multiple versions undergoing combat trials.

All fair points. I haven't done a lot of reading on the background for what we saw in the movie at this point. I'll have to look that up because I was not aware Kylo disabled anything on his ship for X reason.
Post Reply
31 posts